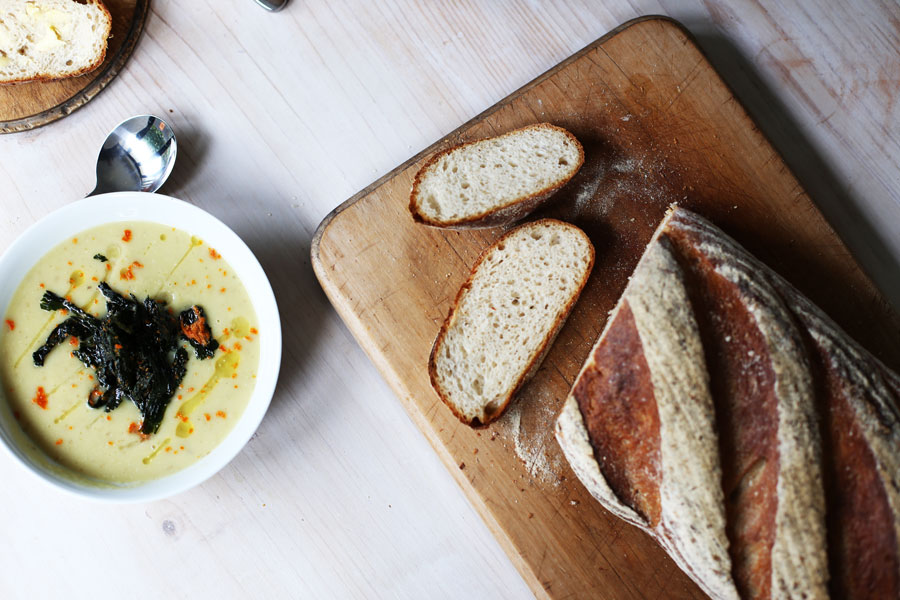 This is the recipe for a fantastically delicious, flavoursome and wholesome vichyssoise (potato and leek soup) with all of the rich creaminess, and without the downsides of using cream (as you shall soon see). This recipe also has a few other tweaks to take it from a simple salt-of-the-earth soup to mind blowing dish.

Soup has never been one of my favourite foods. It is certainly not because of the amount of vegetables in most soups, which I assume is the reason behind many people’s aversion to soups. I absolutely love veggies! So why you may ask, do I not like what is arguably winter’s best, and most warming food?

The answer is homogeneity. Homo-wa? Well for starters, soup lacks texture. It is one homogenous mass of mush. Even if you don’t blend it the chunks are all mushy. And then there is the homogenous flavour. No matter how much flavour you inject into a soup, each spoonful more or less tastes the same. Approximately three spoonfuls into any given soup I get bored. Really bored.

OK, so a nice piece of crunchy toast does add some textural interest to the mushy, homogenous mix. And the flavour of Vichyssoise, combining leek and potato, is one of the great marriages of flavour in the heavenly kingdom of taste. But the problem is that I end up eating more toast than soup – surely more people than me find that soup all too often becomes toast’s unwanted sibling? And I find that the success of too many soup recipes rely upon a lot of butter and cream to add flavour and richness.

With this vegan vichyssoise soup I added some crunchy and Kale Chips with a sprinkling of fresh herbaceous extra virgin manzanilla olive oil.

This Vichyssoise soup has interesting textures and little burst of surpassing and delicious flavours. It is so good that I am even happy to eat it without toast! But a nice piece of buttered (or even better ‘buttered’ in creamed coconut butter if you are vegan) freshly baked sourdough bread does go nicely as an accompaniment if you wish. Slice potatoes into uniform small cubes and the cauliflower into florets about twice the size. Cut the onion into rough pieces.

Throw the chopped vegetables into a large pot with the stock and star anise. Top up with water if necessary (or add more stock if you have it) so that the stock is covering about 2 cm above the vegetables in the pot.

Turn onto a low heat (potatoes are best cooked between the temperatures of 65°C and 75°C so try not to bring it to a boil) for about 30 minutes. Or until the vegetable are cooked through – it may take longer depending on the size that you cut your potato and cauliflower.

While the vegetables are cooking take out the leeks. Cut the top green bits off them (see above photo for indication of how much to chop off). The greenest bit is too course to eat. Make sure you leave the bottom rooty bit one. Slice lengthways down the leek so you don’t quite cut all the way through it. This will open it out so you can wash it under cold water to get rid of the dirt. The rooty bit at the bottom of the leek should still be holding it together.

Once the leek is thoroughly washed cut the bottom of the rooty bit off the end. A tiny bit of dirt may have accumulated there also so quickly wash the ends of the leek if necessary. Slice the leeks thinly.

Add the sliced leek to a pan full of heated olive oil (you can use a generous amount of butter here too if you wish but it isn’t neccesary) with a lavish amount of salt and pepper and cook on a low heat until the leek is softened and turn sweet. Set aside to add to the soup once the other vegetables are cooked in the stock.

Once you have added the cooked leeks to the cooked vegetables blend until completely smooth. This should take at least a couple of minutes.

Put into a bowl with the crunchy kale chips lightly sprinkled on top. Pour over some herbaceous tasting extra virgin olive oil – I used manzanilla olive oil which has these characteristics.

And voila vegan vichyssoise potato and leek soup which taste rich and velvety, but has burst of the fresh herbaceous olive oil and crunchy, salty, green kale. It will take soup to another level for you!